S.AM.I is a committed father who wishes to show his young one lessons from his dark past and protect him from life's dangerous traps. Through music and visuals, together we created a piece that materializes the right feelings and positive messages. 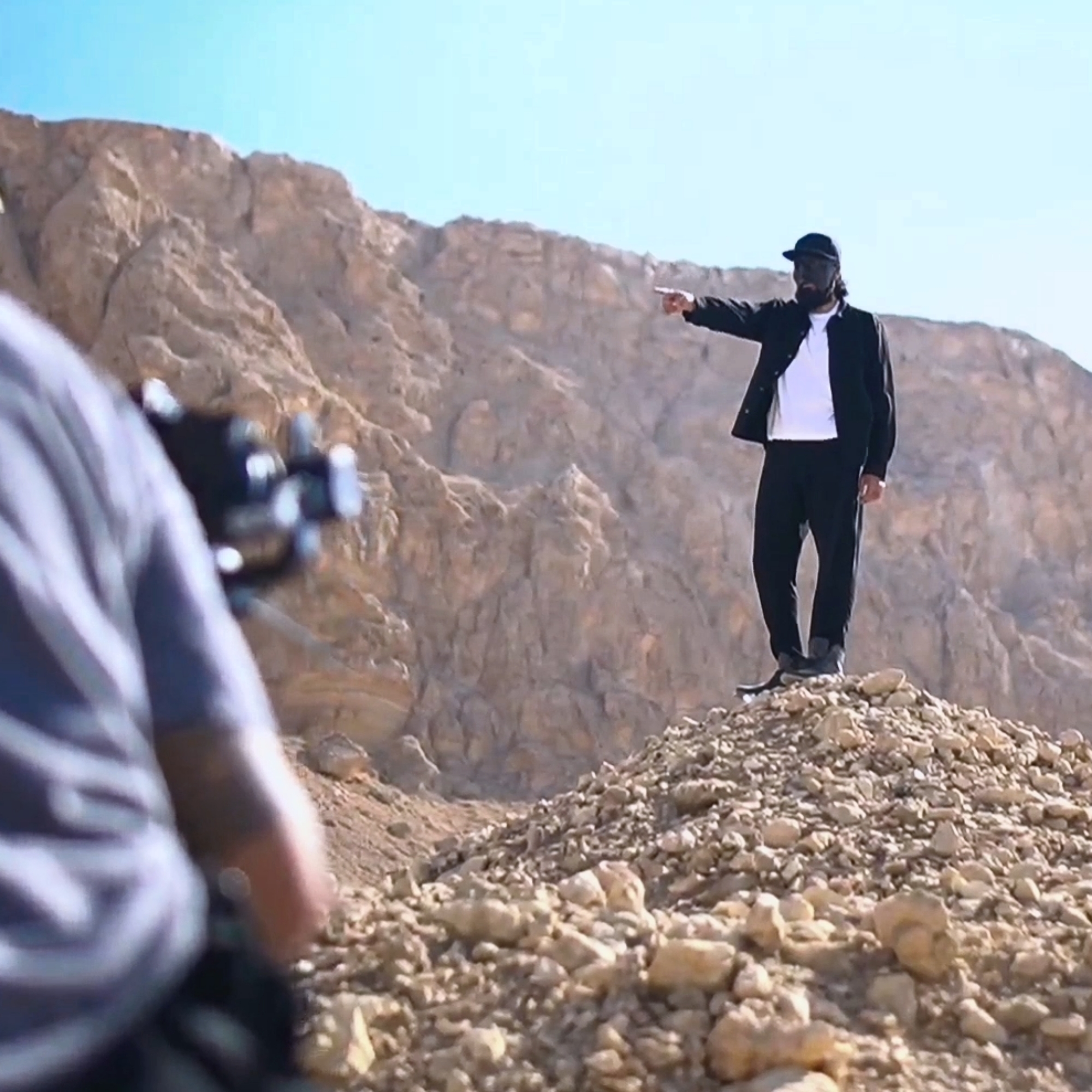 S.AM.I is a rap musician based in UAE. He composes and sings pieces with deep messages. His lyrics won't shy away from sharing concepts that will make you think twice about the world that surrounds you and your beliefs. Youtube Sound Cloud Instagram

FIRST, our musician had a clear idea on dividing the song in two clear areas: the dark (past) and the light (present). The lyrics go quite deep in examples and advice, and the message was serious. But the main point is that in the end we would have a very bright scene. How do we make something with high dark areas, but keep an overall "happy ending" vibe? After all, we're trying to show how some decisions, despite the difficulties felt in the moment, bring happiness! SECOND, it is tricky to navigate stories that are very close to one's feelings and based on real events. You don't want to give too many details in order to keep the privacy of the events/people, nor overcomplicate things too much (jeopardizing the schedule).  But it needs to feel real enough that others will connect with the animated character.

"I appreciate how Mar's studio focuses on projects that carry an inspirational or a positive message. She embraced the idea I had, and I felt that we could collaborate well together. Also, I liked the colors of the previous works she has done, looked FRESH!"
S.AM.I
WHAT WE DELIVERED:

This project holds contrasted internal emotions that have to be clear visually so it matches the music at all times. As the song is in Arabic, I (Mar) requested translations to understand the lyrics to be able to get deep into each part. Only listening to the song is not enough! After a meeting with S.AM.I and their producer and listening to their ideas and needs, I presented the first storyboard in an animated format. See the video at increased speed, also in this section.

I introduced the idea of representing the dark part of the song with dark/light hands symbolizing feelings and other characters. Unsurprising at this part of the stage, it took many emails to get to a point where we were all happy with the storyboard details and design. But this is the most important part of the process and it was well spent! 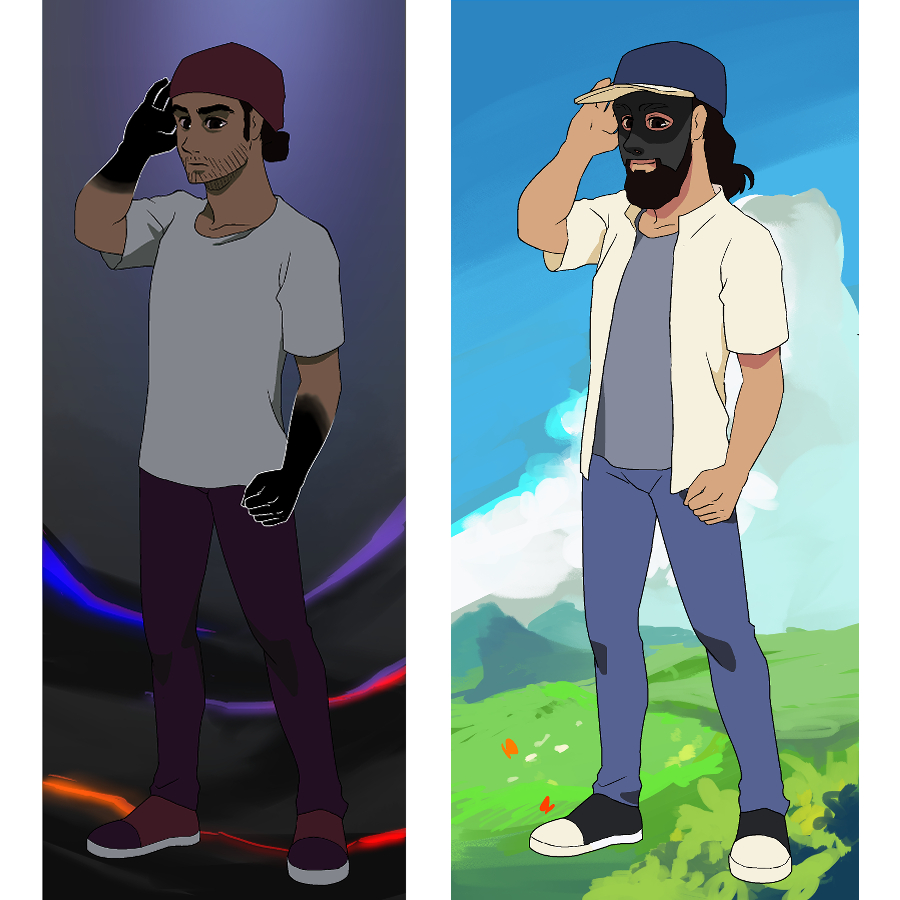 Honestly, the production from when the animation actually begins is the most "silent" part. The team is focused on working! Moreso since Sami took the "more-animation" quote of the proposal. But still, I kept our musician updated with sporadic screenshots and gifs as well. And we suggested changes on the go where I discovered new creative solutions to specific cuts.  An example was about how to tangle the mental transition from "unreachable dark negative space" to "I make an effort to get rid of the darkness" to "I am at peace, help is welcomed". In the beginning, his hands would simply shift from dark to light blue. But in revised versions, we decided getting rid of the black and let an internal light shine through him was both more impactful and clear. 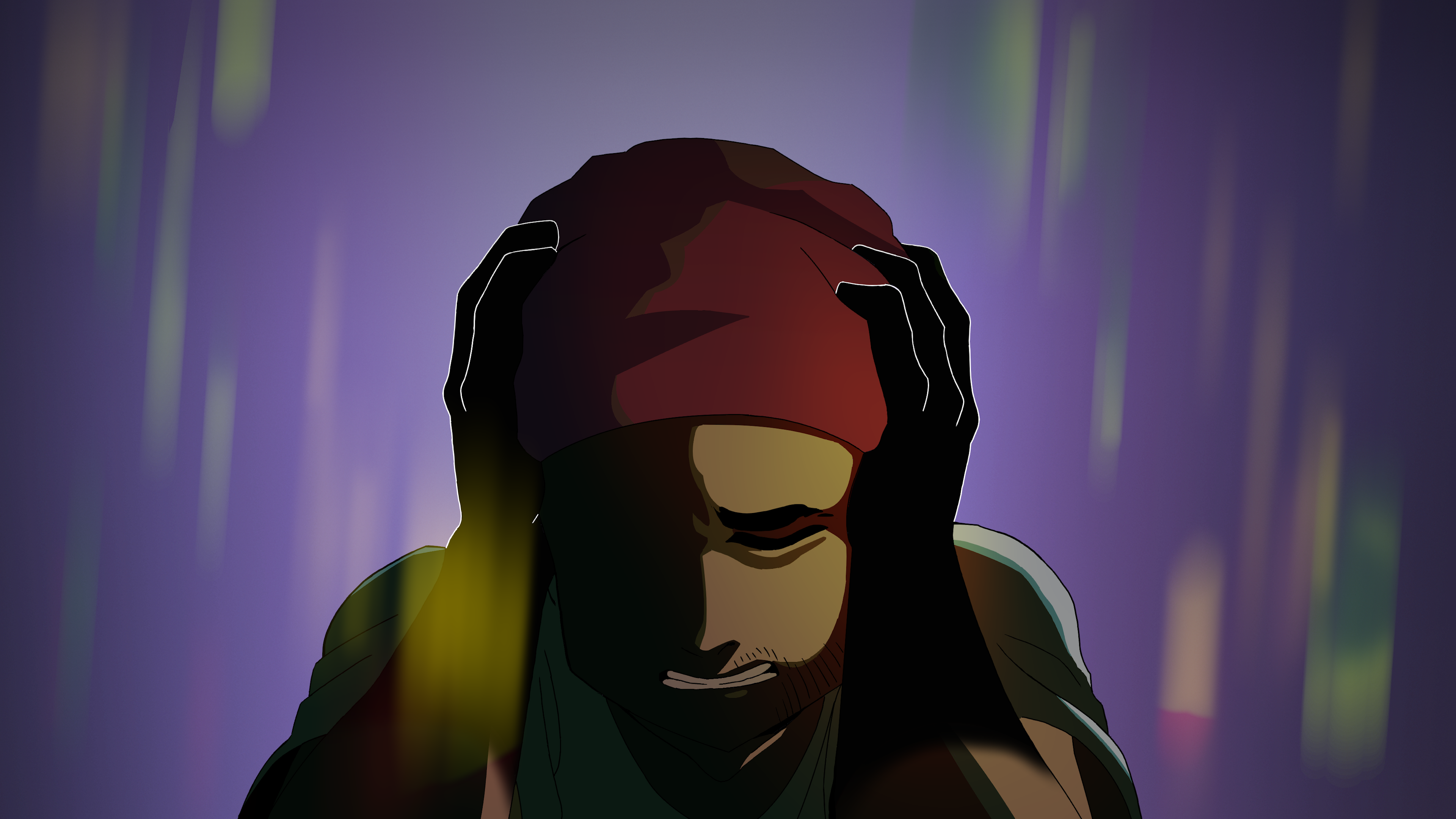 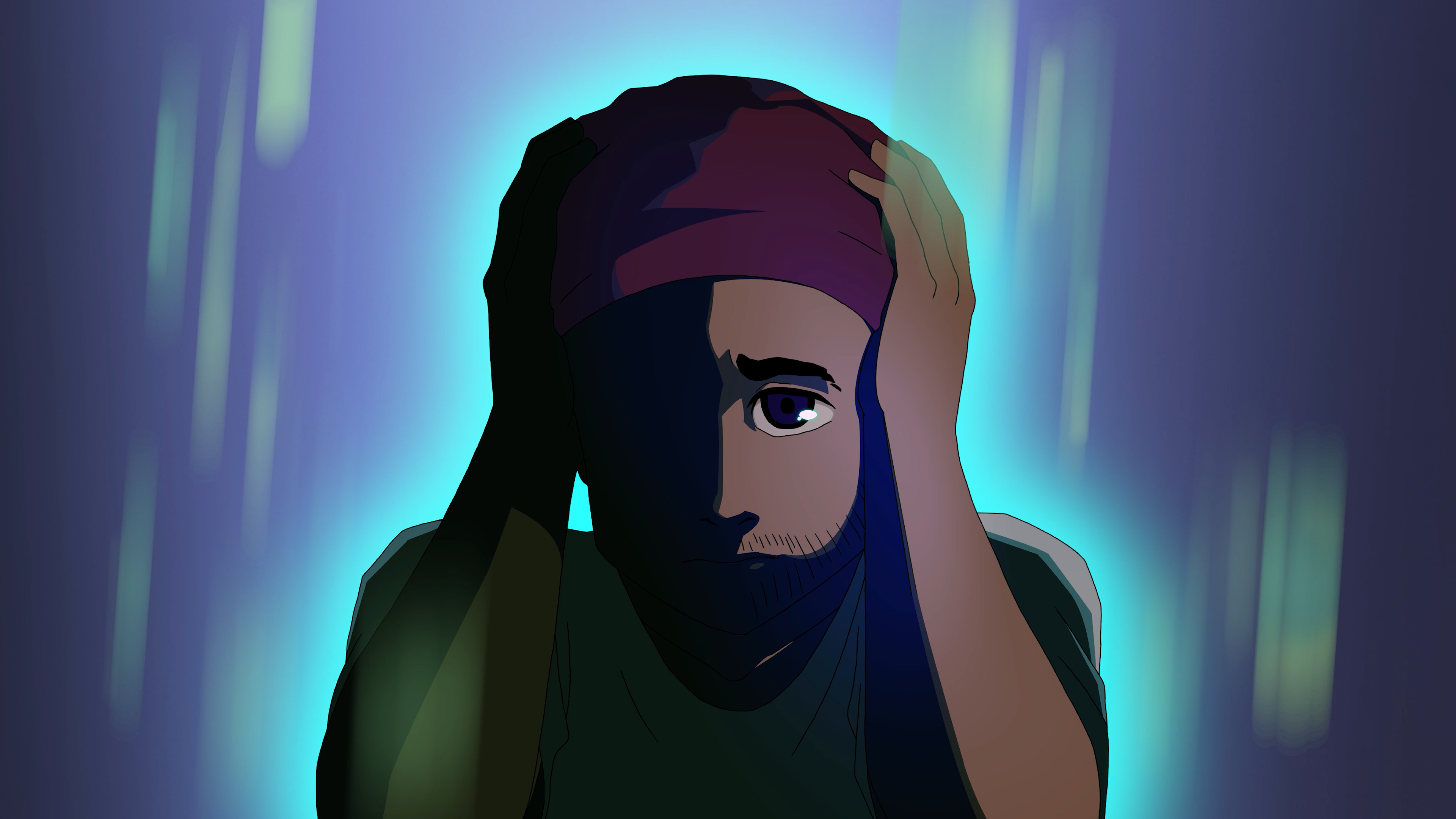 The project was delivered a few days prior to the deadline in case we needed to apply revisions but as it was approved, the only thing left was to create an attractive thumbnail following the format layout by Sami. 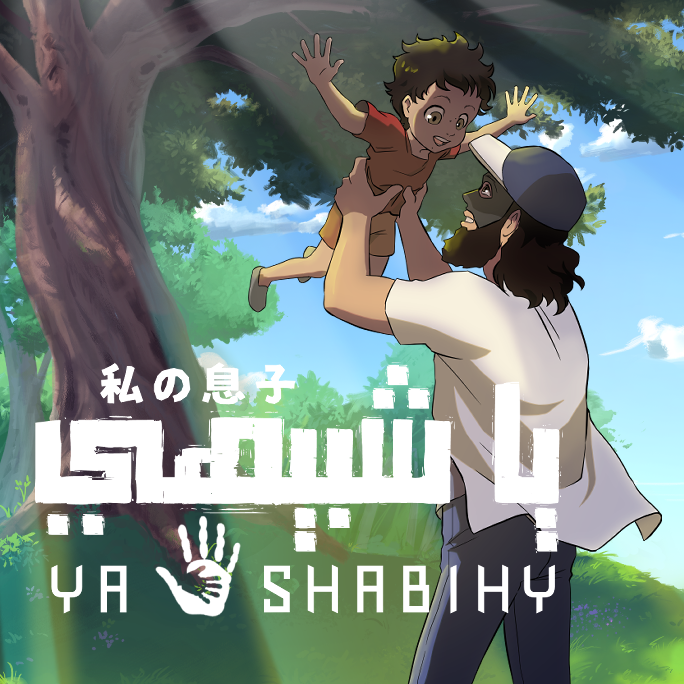 "The workflow, deliveries, communication, and design were excellent."
S.AM.I
Deal Summary
Some pages from the first proposal PDF 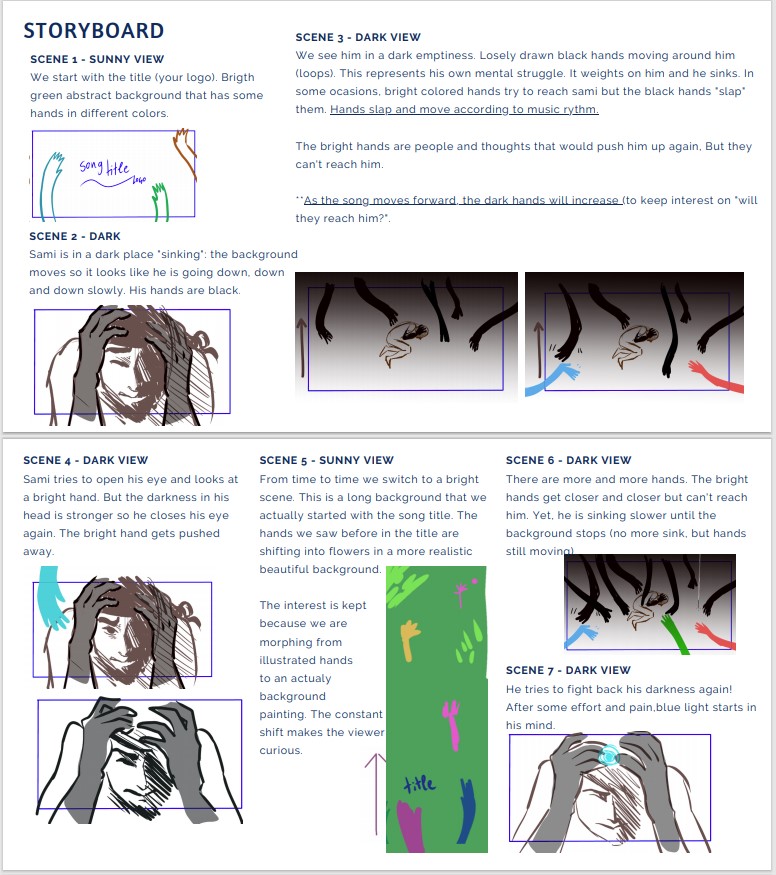 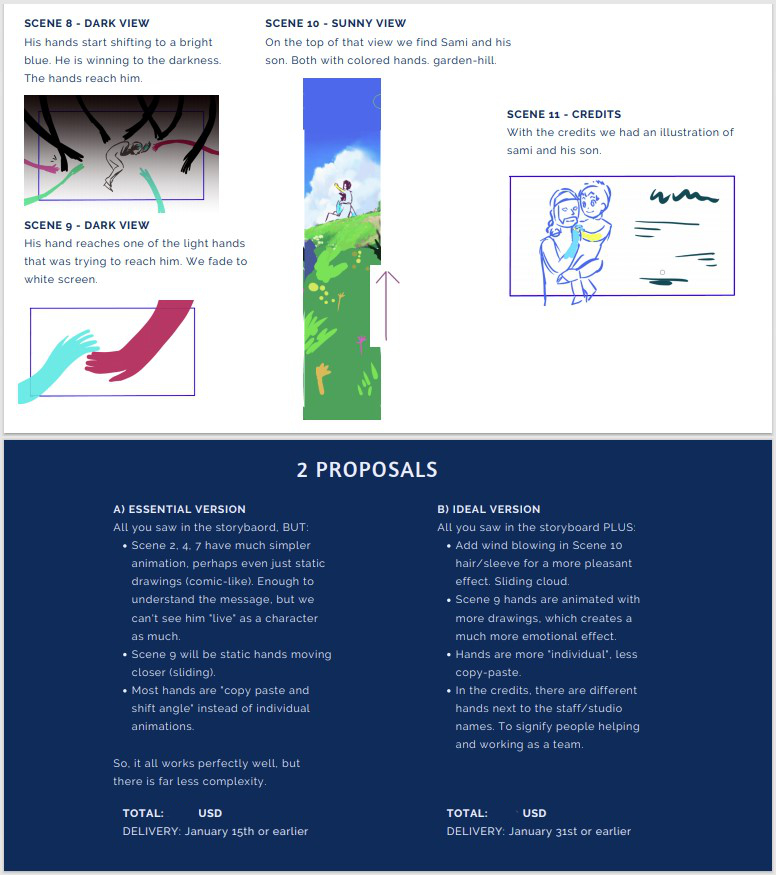 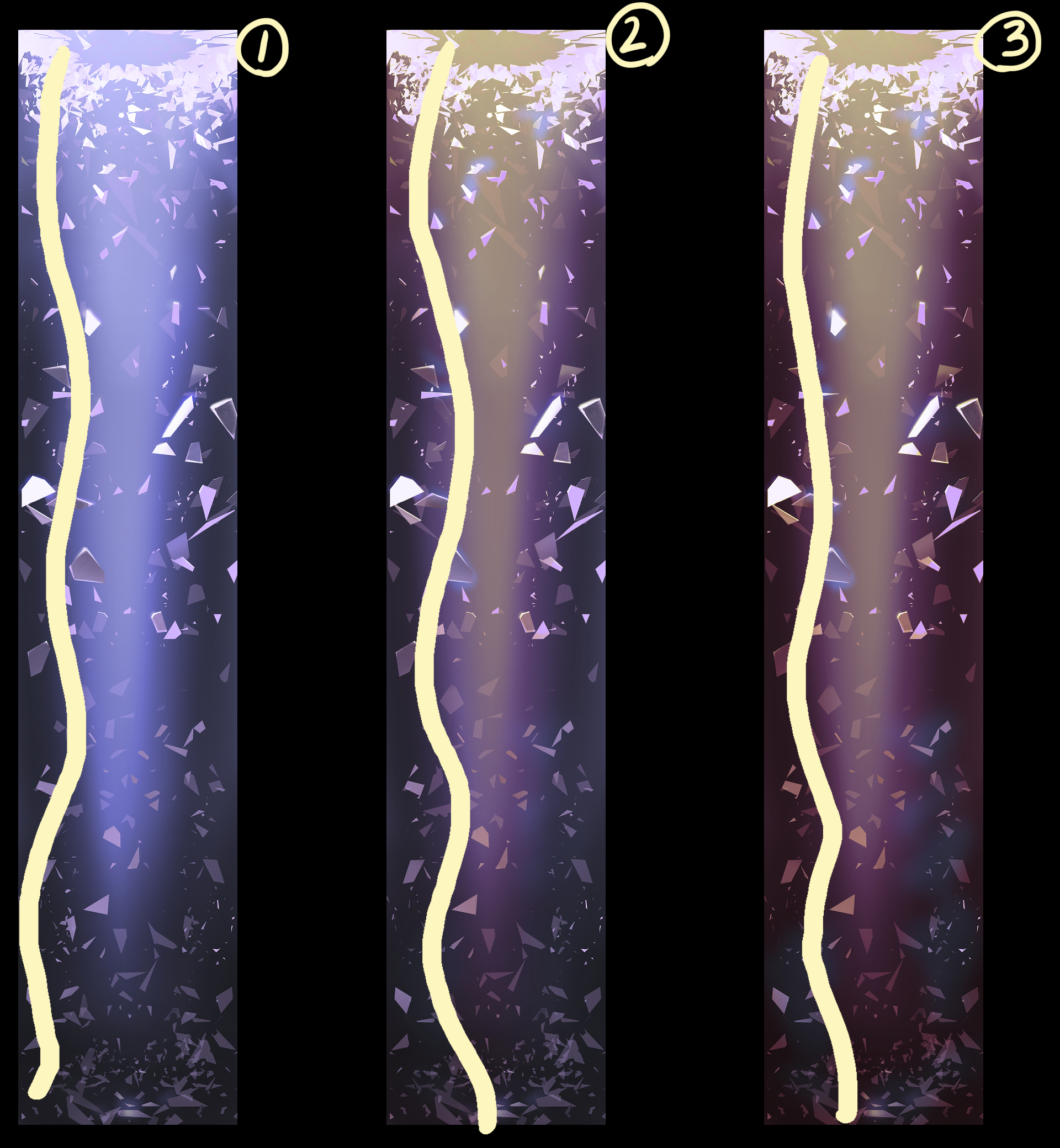 Animated Storyboard video at 300% speed!
This project took around 3 months and a 7 people team from start to finish. 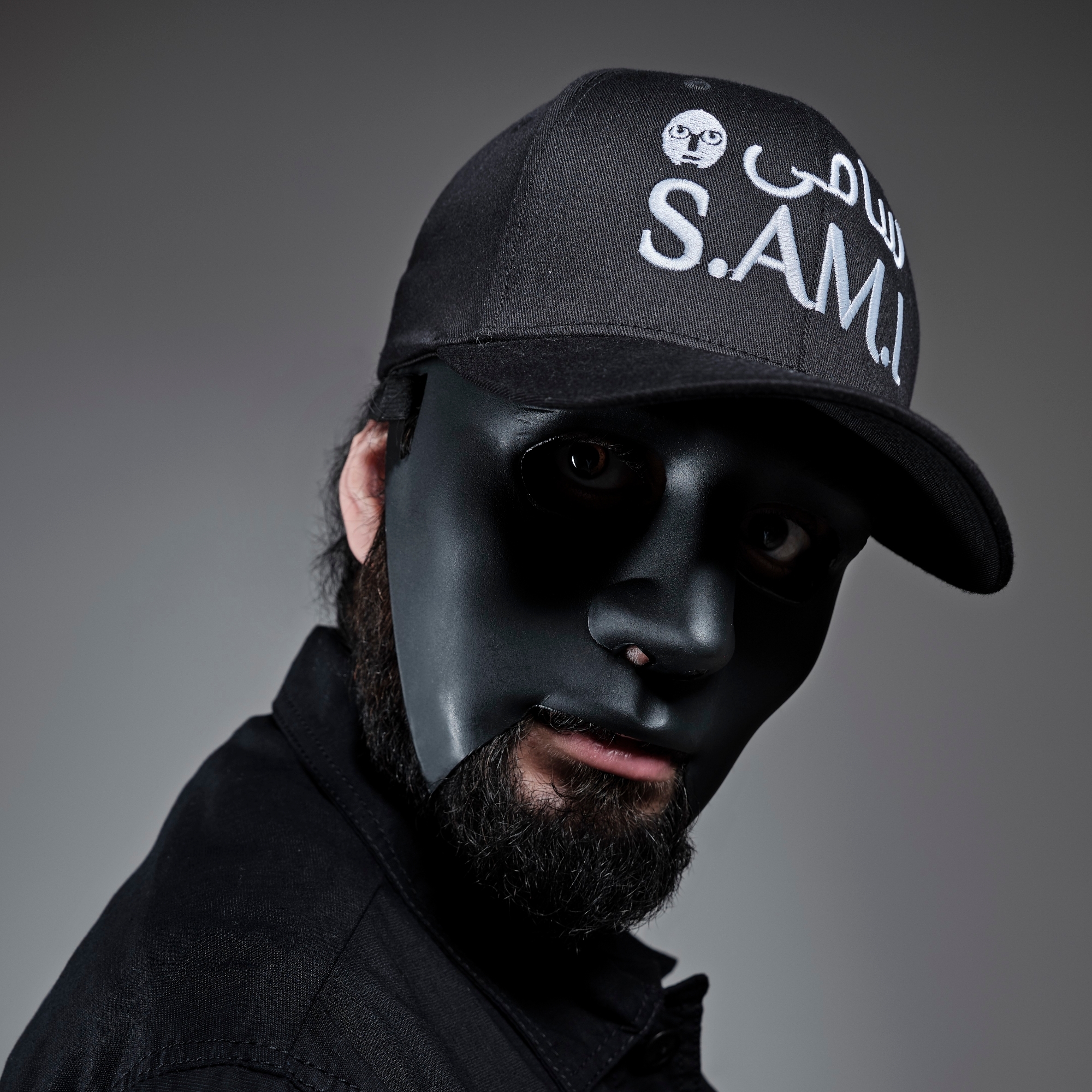 "My experience was wonderful and their drawing quality stands out. They did a good job at taking the idea that I had and bringing it out creatively. I may work with them again."
S.AM.I

See your dream animation become a reality as well

or save us for later:

Through our newsletter, you'll have direct contact with us, see what new cool things we are creating, and be ready to make the most from us as soon as your project is in need of animation.